Saved Searches Advanced Search
The Library is now closed as we relocate to the new facility located at 4852 Lakeview Ave. During the closure, hold requests have been suspended. Items previously placed on hold will be available for pick-up once the new library opens. Due dates have been extended and no fines are being incurred. Book drops are no longer available, so please hold onto your items until the new library opens. During this time, please visit the digital library at https://ylpl.overdrive.com/ for a collection of eBooks, downloadable audiobooks, and streaming films. For additional information, and updates on the opening of the new library, please continue to check our website at https://www.ylpl.org/relocation/ .
Beginning Friday, October 16, digital services will be affected as we relocate to the new library. For Overdrive digital books and downloadable audiobooks, please utilize the Overdrive website at https://ylpl.overdrive.com/, or the Overdrive and Libby app during the service interruption.
Print 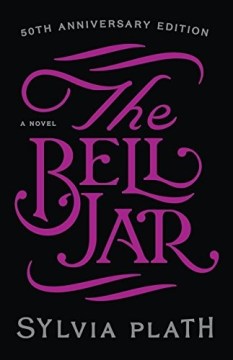 This is a wonderful disaster. Honestly, I want to re-read it because I really do relate to Esther's struggles. You watch this woman spiral into depression and suicidal thoughts. It is a heavy read and there are times when this book can get complicated and a little hard to follow. Still, a very interesting and heartbreaking read.

Esther Greenwood was supposed to be having the time of her life. She had a year until college graduation, pursuing an honors program on a full scholarship and enjoying a vacational internship in Manhattan. Yet she was crumbling on the inside. ⁣
⁣
The problems were too numerous. She yearned for independence but could not discern any specific path of her goal. She was self-loathing but also self-sympathetic. She was depressed but did not know it. Rather than a stepping stone towards the future, her time in Manhattan was a self-exploratory journey gone wrong, exposing all the existential, gender, and socioeconomic problems she had been suppressing for too long. ⁣
⁣
Sylvia Plath was a powerful writer, especially in her narrative of depression and female oppression. Even before she elucidated the bell jar as the socioeconomic, gender, psychological and social barrier that will forever act as Esther’s personal Sword of Damocles, I had a sense of this gooey, suffocating iridescent purple gel that loomed over the entire book. Whenever I picked it up, it was as if I were holding a piece of airtight grey cloud that was ready to burst. ⁣
⁣
While I was reading, I kept imaging this plastic ballerina doll strapped to her pole and her mouth opened wide in a silent scream. I had considered it the product of her latent depression, but at the end of the story, I realized that it was also one of her obsession with the appearance of self-possession. ⁣
⁣
While we might not all have personal experiences with depression, many of us also twirl beneath the same burnished bell jar. On it might be a hologram of effortless perfection, but within we are choking on its fatal purple film. The antidote? Probably unobtainable, but if there were an immediate solution, it would be the willingness to at least wipe the illusion of perfection and unite our ambitions and accomplishments with our insecure, imposter-syndrome-filled selves. ⁣

I would have given this book 4 stars had it not been for the racism. While some might say that using derogatory words targeting African, Chinese, Indian and other minorities was a “norm” for Sylvia Plath’s time, the protagonist and narrator, Esther, only uses these words when she wishes to highlight her physical and aesthetic deficiencies. ⁣⁣
⁣⁣
So we know that Esther, and probably Plath herself (since this work is semi-autobiographical) holds some curious racial connotations concerning beauty and appearances. It is not “just slurs.”

Read this for the first time and loved it almost instantly, truly a classic !

Sylvia Plath was one of the 20th century's most famous poets, who stuck her head in her oven,and perished. She was married until death to another (not quite so famous of a) poet, Ted Hughes. Can a woman as unhappy as apparently she was achieve happiness in a marriage?

I hated this book. It was very boring, and I didn't like the main character.

Ah, Sylvia. Her prose is lovely and, of course, poetic. She brings her characteristic confessional style to this, her only novel.

Love this title! Such a relatable coming-of-age story.

I was expecting a kind of raw confessional outpouring, but this book was more artful in its narration and reveals Plath as a very talented observer and prose writer. Even her refusal to allow Esther Greenwood to appear "nice" in any way is a deliberate artistic choice. But I wondered what was the point at the end. The story didn't seem to have any shape other than a record of a young woman's increasing depression, mental health breakdown, and (ambiguous) recovery.

A story of the life of a young becoming writer in New York. Bound to become the next successful writer. But "nobody looks like what they are on the inside" perfectly describes Esther Greenwood, there is more she doesn’t show.
I wouldn’t pick up this book were it not for my high school English assignment. I felt sadness, it describes depressed and suicidal thoughts but it is not gory, it goes into detail enough for the reader to get a feeling. Part of my family has a background of varying mental illnesses. I have an idea of what it feels like and the fact that Plath herself committed suicide made this book more significant. Plath did not plan for her book to be published in America, she feared people would recognize the characters, she kept some of their real names. A biography and a novel at the same time. She must have had similar feelings and experiences.
This book is a great view of someone who has mental illnesses. It’s short, easy language, and in some ways I found it relatable. It isn’t overwhelming. Also, the Bell Jar is a metaphor for how Esther feels. She feels stuck in her own head unable to escape thoughts of self doubt and dejection - trapped.
The Bell Jar is a classic. Unique in its time, it explores how society views a woman, mental illness and treatment. Rating: 4/5
@TreeHugger of the Hamilton Public Library's Teen Review Board

The Bell Jar is a novel by the famous poet, Sylvia Plath, but originally published under the pseudonym "Victoria Lucas" in 1963. The story is based on Plath’s personal experiences following the character Esther Greenwood who is an aspiring writer, who is uncertain in her place in the world. Esther’s mental health slowly deteriorates over the course of the book leaving her neurotic and suicidal, until one day her mental plague is unbearable and she makes an almost tragic action leaving her hospitalized. I would recommend this book because Plath is an extremely intelligent writer and tells her story beautifully.
@GoosReviews of the Teen Review Board at the Hamilton Public Library

“I didn’t know why I was going to cry, but I knew that if anybody spoke to me or looked at me too closely the tears would fly out of my eyes and the sobs would fly out of my throat and I’d cry for a week. I could feel the tears brimming and sloshing in me like water in a glass that is unsteady and too full.” p. 100

“Finally, when all the money was used up, I would be moved to a state hospital, with hundreds of people like me, in a big cage in the basement.
The more hopeless you were, the further away they hid you.” p.160

“Her thoughts were not my thoughts, nor her feelings my feelings, but we were close enough so that her thoughts and feelings seemed a wry, black image of my own” p. 219

“To the person in the bell jar, blank and stopped as a dead baby, the world itself is the bad dream.” p.237

“How did I know that someday—at college, in Europe, somewhere, anywhere—the bell jar, with its stifling distortions, wouldn’t descend again?” p.241

“I felt limp and betrayed, like the skin shed by a terrible animal. It was a relief to be free of the animal, but it seemed to have taken my spirit with it, and everything else it could lay its paws on.”

“To the person in the bell jar, blank and stopped as a dead baby, the world itself is a bad dream.”

“I don’t see what women see in other women,” I’d told Dr. Nolan in my interview that noon. “What does a woman see in a woman that she can’t see in a man?” Dr. Nolan pauses. Then she said, “Tenderness.” That shut me up.

The floor seemed wonderfully solid. It was comforting to know I had fallen and could fall no further.

ArapahoeTina thinks this title is suitable for 14 years and over

EuSei thinks this title is suitable for 18 years and over

EuSei thinks this title is suitable for 18 years and over

Sylvia Plath's shocking, realistic, and intensely emotional novel about a woman falling into the grip of insanity.

Esther Greenwood, a college student from Massachusetts, travels to New York to work on a magazine for a month as a guest editor. Esther returns to the Boston suburbs and discovers that she has not been accepted to a writing class she had planned to take. She will spend the summer with her mother instead. Esther awakens to find herself in the hospital. She has survived her suicide attempt with no permanent physical injuries. Once her body heals, she is sent to the psychological ward in the city hospital, where she is uncooperative, paranoid, and determined to end her life.