Saved Searches Advanced Search
The Library is now offering curbside service. For more information on how to access this service, please visit our website at https://www.ylpl.org/curbside/ . Please continue to enjoy our eLibrary to access digital materials.
Print 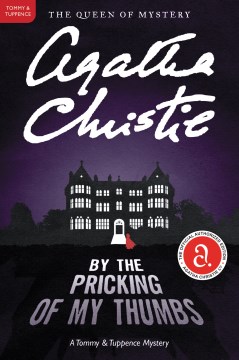 By the Pricking of My Thumbs

When Tommy and Tuppence visit an elderly aunt in her gothic nursing home, they think nothing of her mistrust of the doctors; after all, Ada is a very difficult old lady. But when Mrs. Lockett mentions a poisoned mushroom stew and Mrs. Lancaster talks about "something behind the fireplace," Tommy and Tuppence find themselves caught up in a spine-chilling adventure that could spell death for either of them . . .
Publisher: 2010
ISBN: 9780062006608
Characteristics: 1 online resource

A fun Tommy and Tuppence mystery. They are Christie's only sleuths who age, which gives them interesting facets. --Laura (for more picks, you can follow WoodneathLaura)

A fun Tommy and Tuppence mystery. They are Christie's only sleuths who age, which gives them interesting facets.

Another Tommy and Tuppence Mystery written by the Queen of Crime herself. This book was a little slow until the very end, but it was well thought-through, with everything connecting to itself in a sensible, complex fashion. The ending was a little rushed, but I liked how everything wrapped up real nice. It was a good story with a disturbing killer which is always a plus

Great book! I found it very interesting; Christie kept me interested from page 1.

Tommy & Tuppence Beresford are my all-time favorites of Mrs. Christie's characters. I love her books and the TV series made about the couple.

A Tommy and Tuppence mystery. This actually was the first time I encountered this husband and wife detective team. A lot of fun. Like Nick and Nora from the Thin Man, although Tuppence does more sleuthing than Nora ever did. Funny and clever, this book made me want to read more about Tommy and Tuppence.

Wow, what a good read ! This is one of the best reads that Agatha Christie has written . I had spent a nice quiet evening at home and read the whole book thru and did not notice that it was after midnight by the time that I had finished read !

hopecovey thinks this title is suitable for 14 years and over

Tommy and Tuppence Beresford travelled to a nursing home for women called Sunny Ridge to visit their elderly aunt Ada. While there, Tuppence met another old woman by the name of Mrs. Lancaster, who said to her suddenly, “Was it your poor child?” Though confused, Tuppence dismissed it as an old woman's fancy. A few weeks later, Aunt Ada died, and Tommy and Tuppence once again found themselves at Sunny Ridge, sorting through Aunt Ada's belongings. Tuppence took a liking to a painting of a house by a canal, but she discovered it belonged to Mrs. Lancaster. But before she could ask if Mrs. Lancaster wanted the painting back, Tuppence found out that very suddenly Mrs. Lancaster was taken away from Sunny Ridge to live with some distant relatives. Concerned for Mrs. Lancaster's safety, Tuppence tried to locate her whereabouts, and instead found herself wrapped up in a dangerous mystery that put her life in danger.