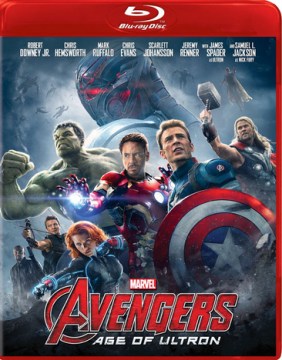 When Tony Stark tries to jumpstart a dormant peacekeeping program, things go awry and Earth's Mightiest Heroes, including Iron Man, Captain America, Thor, The Incredible Hulk, Black Widow and Hawkeye, are put to the ultimate test as the fate of the planet hangs in the balance. As the villainous Ultron emerges, it is up to The Avengers to stop him from enacting his terrible plans, and soon uneasy alliances and unexpected action pave the way for an epic and unique global adventure.
Publisher: [United States] : Marvel Studios, c2015
Edition: Widescreen edition
Characteristics: 1 videodisc (141 min.) : sd., col. ; 4 3/4 in
Alternative Title: Avengers : age of Ultron
Marvel's Avengers : age of Ultron

Ok it's Marvel. So it is awesome. I myself am a huge marvel fan, and I totally loved it.

This one feels lacking. It’s just good enough not great. The voice of ultron is great with expression, I wish they would have made ultron half robot half human so we can see the real expression to strengthen the character, just think of Thanos.

This is an amazing movie! The characters are well thought out and I love the new characters! Highly recommend!

This movie is a sequel to the first avengers movie. Although I think the first avengers movie was better this movie was also not bad. This movie focuses on how Tony Stark was selfish and thought he knew everything, which caused him to make a mistake that created a villain “Ultron”, who couldn’t ended the world. This movie is about the avengers stopping Ultron (who Stark built) from his mission of complete world extinction. Although I think the plot and story line was pretty cool, I think the film didn’t turn out the way they meant it to and a lot of the time was being repetitive. In my opinion I would still recommend watching this movie but it is the worst avengers movie (in my opinion). The CGI and effects were also really cool and the overall look of the movie was amazing. @ButterChicken of the Teen Review Board at the Hamilton Public Library

Avengers: Age of Ultron is the second Avengers movie and the 11th film in the Marvel Cinematic Universe. Written and directed by Joss Whedon and stars Robert Downey Jr, Chris Evans, Chris Hemsworth, Mark Ruffalo, Scarlett Johannson, and Jeremy Renner. When the Avengers recover an alien scepter from a Hydra base in the country of Sokovia, Tony Stark and Bruce Banner discover an artificial intelligence within the gem the scepter houses. Stark wants to utilize it in a world peacekeeping program, named “Ultron”. After a few days of tests, Ultron becomes unexpectedly sentient. He becomes scared, and with his unstable mind, takes Tony’s protocol of protecting the world, and decides the best way to save the world, is to end humanity. The Avengers must assemble to prevent Ultron from reaching his goal and fulfilling his sinister plot. This movie is filled with twists and turns. Its chalked full of action, emotion and great storytelling that stays true to its source material. Not to mention it features one of my favourite ensemble moments in the MCU to date. As well, this movie is very important in future events that take place in the MCU, which also makes it quite memorable. I give this movie a 4/5. @Sans of the Hamilton Public Library Teen Review Board

The Maze Runner is a visual adaptation of the book series "Maze Runner". The film is about a young man named Thomas who wakes up to find himself in a maze, surrounded by strangers and 4 huge walls. He meets a girl named Teresa who he seems to somehow know. Together, with the rest of the people, they try to escape the maze and figure out what is happening. I have read all the Maze Runner novels in the series as well as all the movies, and this film was one of my favorites. If you are a fan of the Maze Runner trilogy or looking for a good flick to see, Maze Runner is for you. 4/5 - @CoolReadz of the Hamilton Public Library Teen Review Board

As with all previous Marvel movies, this one is aging well because they keep coming up with new movies that get you intrigued to look into older movies that flesh out the backstories. This keeps movies like this feeling fresh even when it's being re-watched a year later (over again). This particular movie goes into the "mind stone" and also references to Wakanda is made with the character Klaw being introduced.

"If you die, walk it off." -Captain America

Thor: No one has to break anything.
Ultron: Clearly, you've never made an omelet.

Ultron: When the earth starts to settle, God throws a stone at it, and believe me, he's winding up.

Tony: I get first crack at the big guy. It's Ironman he's after.
The Vision: (walking past) That's true, he hates you the most.

Ultron:[to Black Widow] "I wasn't sure you'd wake up. I hoped you would. I wanted to show you...I don't have anyone else. I think a lot about meteors...the purity of them. BOOM! The end. Start again. The world made clean for the new man to rebuild. I was meant to be new. I was meant to be beautiful. The world would have looked to the sky and seen hope...seen mercy. Instead, they will look up in horror because of you. You've wounded me. I give you full marks for that. Well, like the man said: 'What doesn't kill you, just makes me stronger.' "

[Found the "I AM" line interesting.]

Vision: "You think I'm a child of Ultron? I'm not Ultron; I'm not Jarvis either. I AM."

Natasha: Thor, report on the Hulk?
Thor: *passionately* The gates of Hel are filled with the screams of his victims.
*Bruce looks more depressed*
Thor: But not the screams of the dead, of course. No, no…wounded screams, mainly whimpering, a great deal of complaining and tales of sprained deltoids and, uh…and gout.

Ultron: I know you're good people. I know you mean well. But you just didn't think it through. There is only one path to peace... your extinction.
Rogers: We can still find a better way to achieve peace?
Ultron: I can't actually throw up in my mouth, but if I could I would do it!
===
Ultron: Worthy? How could you be worthy? You're all killers. You want to protect the world, but you don't want it to change. There's only one path to peace... your extinction.
===
Rogers (Captain): You get hurt, hurt 'em back. You get killed... walk it off.
===
Vision (Jarvis:) Humans are odd. They think order and chaos are somehow opposites and try to control what won't be. But there is grace in their failings. I think you missed that.
Ultron: They're doomed!
Vision: Yes... but a thing isn't beautiful because it lasts. It is a privilege to be among them.
Ultron: You're unbelievably naive.
Vision: Well, I was born yesterday.

blue_panda_4979 thinks this title is suitable for 10 years and over

blue_dolphin_14336 thinks this title is suitable for 10 years and over

indigo_tiger_418 thinks this title is suitable for 8 years and over

LanLite thinks this title is suitable for 13 years and over

blue_alligator_6279 thinks this title is suitable for All Ages

CielyRanger thinks this title is suitable for 11 years and over

Violence: The most violent part of this movie is when someones arm is cut off but is still well in the boundaries of a PG-13 movie. Not any more violent than the other MCU movies.

Other: There may be shots of people drinking or smoking but if there are they are not memorable. It may be problematic to some parents that there are many God references, some positive, some not so positive. The not-so-positives all come from Ultron but a young child might not grasp that distinction, they'll just hear someone misquoting God.

Frightening or Intense Scenes: Duh. this is a superhero movie. The notables are that Ultron is quite creepy looking, and actually karate chops someone's arm off. It isn't graphic but is...a little startling. A major character is riddled with bullets and blood is on his\her (I'm not giving any clues, people!) clothes. A child is threatened.

Violence: Again, typical Marvel. The violence is ridiculously large scale, but the injured parties are buildings, not people. LOTS OF BUILDINGS! In fact, the central plot involves lifting an entire city thousands of feet into the air and dropping it like a meteor, wiping out humanity like so many dinosaurs. There are however a few bloody wounds, but not particularly bad ones.

Coarse Language: Typical Marvel movie cussing. No obscenity but quite a sprinkling of expletives\profanity. There's even a running joke about swearing.

Sexual Content: Kissing, a suggestive reference, a reference to sterilization.