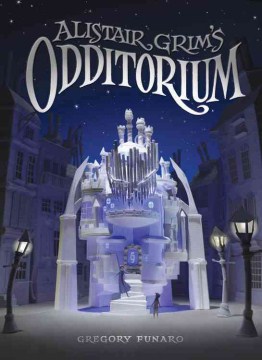 In Victorian England, Grubb, an orphan about twelve years old, escapes his life of drudgery as a chimney sweep's apprentice and finds himself in a very strange house filled with magical objects and creatures, but soon he learns that there are dark forcesseeking his new master.
Publisher: Los Angeles : Disney, Hyperion, [2015]
ISBN: 9781484700068
1484700066

A full review of this book can be found in the "Summary" section. The review was published in the Stratford Gazette in March 2016

It's been a while since I read a book that I enjoyed this much. This is wacky and fun, and you're always learning more about what's happening. I wasn't overly impressed with the ending, which seemed rather sudden to me, but I suppose it worked. I might even read the sequel... which I haven't deigned to do for quite some time. I'm finding that even as I grow up, books targeted at the middle school audience are much more interesting and well-written than the majority of those for young adults.

“Your strength is impressive,” the woman said. “Being a chimney sweep has made you stronger than you realize. Both inside and out.”
Twelve-year-old Grubb, an orphaned chimney sweep apprenticed to the cruel Mr. Smears, has led a hard, miserable life. One day he escapes by stowing away in a large trunk on a fancy travelling coach. When the coach stops, he finds himself at Alistair Grim’s “Odditorium”, a wondrous, unique place. Filled with enchanted machines and oddities, the vast, spooky Odditorium, powered by mysterious magical energies, is home to a cast of people who quickly accept the young boy as one of their own.
With no idea of how his life will shortly change forever, Grubb becomes an apprentice to the secretive Mr. Grim.
Very soon after that, the Odditorium is attacked by evil forces from outside. Grubb must embark on a series of dangerous adventures in order to save the Odditorium, its magic and its people from falling into malevolent hands and suffering a terrible fate. For some reason, only Grubb can do this … but how, and why? He knows that he’s no hero … he’s just a chimney sweep.
However, it is only Grubb who possesses the courage and intelligence needed to wage the life-or-death battle.
Gregory Funaro’s fast-paced fantasy tale includes many twists and turns, as well as magic, mystery, adventure, humour and lovable characters whose fates will matter to readers. At times the story may remind readers of the Charlie and the Chocolate Factory, The Phantom Tollbooth or the Harry Potter stories, but it actually is an original, highly imaginative tale that stands on its own.
Well-written and thoroughly enjoyable, Alistair Grim’s Odditorium will keep readers’ interest despite its length of more than 400 pages.
The just-published sequel to this book is Alistair Grim’s Odd Aquaticum.
** Recommended for ages 8 to 12 years.