Saved Searches Advanced Search
NEW: You may now place holds on up to 10 available & checked-out items. The Library is offering curbside service. For more information on how to access this service, please visit our website at https://www.ylpl.org/curbside/ . In order to ensure safe handling protocols, items are being held for 72 hours before being checked-in. During this time, no overdue fees will be incurred.
Print 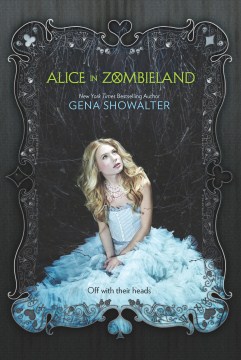 When her entire existence is shattered in the blink of an eye, Ali is forced to partner with secretive bad boy Cole Holland to avenge the deaths of her loved ones by returning an undead army to their graves.
Publisher: Don Mills, Ont. : Harlequin, c2012
ISBN: 9780373210589
0373210582

Alice in Zombieland is a book about a girl named Alice Bell who suffers from the loss of her family in a car crash. Struggling to overcome it, she starts getting visions of what appear to be zombies that her dad, whom she once thought was crazy for believing this, was able to see. After learning ... Read More »

It was a truly amazing book with great story and character development. All of the characters were realistic, along with the very world itself.

There's no doubt that anyone who read this book, would absolutely love it! Its got the romance and the action and a little bit of drama all mixed into one killer story! I can't wait for book two to come out!

Alice in Zombieland is a book about a girl named Alice Bell who suffers from the loss of her family in a car crash. Struggling to overcome it, she starts getting visions of what appear to be zombies that her dad, whom she once thought was crazy for believing this, was able to see. After learning of the many dangers they pose to people, she meets a guy named Cole, who also can see the zombies, and him and the rest of the slayers go and try to destroy them. I like how the author changed the mythology of zombies into a way that is that makes them more eerie and spiritual, giving us a new perspective of them besides the typical brain eating monsters they are portrayed as. I would recommend this for anyone who likes books with adventure, as well as a little romance. Out of five stars, I would give this book 5 out of 5 stars. Kylie, grade 9, of the Yorba Linda Teen Book Bloggers

This book is the best and I highly suggest for people to read it. This book is well written.

It is a beautifully written book that has an amazing plot. If you get the chance READ THIS BOOK

I was recommended this series by a friend, who cautioned me that many readers don't end up liking it. While I can see why this may be, it also kind of shocked me at the amount of dislike there is for this series online. Perhaps readers were expecting more Alice in Wonderland references, or they wanted more zombie graphics. What I viewed was a modern spin of a girl, Ali(ce) Bell, undergo struggles leading to her adventures and encounters with zombies. Just a warning, but our generation is becoming more aware of mature content, and this book would not be suitable for anybody simply expecting a child's story. 4.5/5 Stars.
- @Siri of the Teen Review Board at the Hamilton Public Library

Alice in Zombieland. Clever name, clever book. I never thought a book about a teenage girl and a muscular, good-looking heartthrob fighting zombies could be so intriguing. It wasn't one of those books with a complex monster who isn't explained thoroughly, this one made it sound so simple. The characters were relatable, and the relationships were well-thought out. It also had good writing and a few laughable moments. A good book, can't wait to read the rest of the series!

Alice in Zombieland by Gena Showalter is a and loose retelling of Lewis Carrol's Alice in Wonderland that has failed to grab my attention because of each characters' boring and stereotypical personalities, the poor writing, and weak storyline that just got more confusing throughout the book.

The way all of the characters communicated with each other not only made the characters, but the story itself seem like a joke. The author also barely provided any detail, making everything- the setting, the characters- seem so uninteresting and vague. But what seemed to irritate me the most was that this story didn't seem like a story, it just seemed like someone narrating hoe they stumbled into a new world. It sounds interesting in the beginning, but, then what? For most of the story, l feel like the characters are just bidding their time, until some random event occurs at the end of the book, which is suppose to make it sound interesting. But really, it just makes the story seem even weirder because the ending was just so out of the blue.

Although, I did find this part of the story enjoyable: the developing romance between the main characters Alice and Cole. It's a bit cheesy, but it's certainly heart-pounding.

I don't like zombies. I'm honestly bored to tears of this current obsession. But I love Alice in Wonderland, so I gave this book a try. I suppose it is much easier to be excited by a book that you don't have high expectations of, than the reverse.

Like other readers have said, it is a very, very loose retelling of Alice in Wonderland. You have the white rabbit, you have a blonde girl in blue, but you have a cat who is not always there and keeps the main character sane. The author has very entertaining pop culture references and she made me laugh a lot.

This is an Alice re-telling in the absolute loosest sense of the word. So if that’s what you were expecting, this is probably not going to be your cup of tea. The only real nods that I noticed was the white rabbit and the a blonde-haired blue-eyed girl named Alice. That’s it. Mostly it reads like a high-school romance with paranormal elements.

I was looking forward to this book because I really like another series that the author, Gena Showalter, writes. I thought “talented author + zombies = GIMME!” Well, while there were some elements that I loved (and the primary reason the book got a 4 instead of a 3), overall the book was kind of a disappointment.

Its got a very weak beginning that did not hook me immediately. I pretty much slogged through the beginning chapters. Also, I found myself thinking “Oh god, here we go. A freaking love triangle.” Now, I’m happy to report that the love triangle never fully materializes, but it doesn’t feel like its deliberate that it did. It kind of reads like Showalter realized before it was too late that the love triangle thing has been ridiculously overdone, and she corrected it before it could take hold.

If I had to describe this book to someone, I’d probably say something like “Twilight, no sparkles, no love triangle, Bella with an actual personality.” Is that completely accurate? Of course not, but that’s the slot it fit itself into in my mind.

Now, Showalter’s dialogue shines in Alice in Zombieland. I found myself grinning at some of the snappy back-and-forth. I loved that Alice did actually have a strong personality, and wasn’t willing to take crap from anyone. Her friend, Kat, was awesome, and I loved how she was relentlessly cheerful without being despicably shallow. The way she approaches Alice’s grieving is great. She acknowledges it, makes sure she doesn’t need anything, but doesn’t pity her or anything like that.

I also absolutely adored the very unique take on zombies. Took me completely by surprise, and though I’m not going to spoil what it is for you, I will say that it really was a breath of fresh air.

There’s definitely a religious theme that runs through the book, and you can tell this is meant for teens. While there’s obvious hormones, there’s no sex (though it is talked about in non-graphic detail), no cursing, and church, faith, angels/witnesses, and praying are definitely sprinkled sporadically throughout the novel.

Overall, once it found its feet, it was an entertaining read that I blew through in one sitting. However, I’d be shocked if I decided to read the second book in the series. This was essentially a fluff piece with a few good points, and I don’t do the fluff well.

This is an excellent book, spiked with romance, but filled with enough action to keep it interesting. Its narrative is thrilling, and it brings a fresh new perspective to the classic zombie novel.

KendallMorales thinks this title is suitable for 99 years and over

Bookcat18 thinks this title is suitable for 14 years and over

black_cat_9072 thinks this title is suitable for 12 years and over

white_cobra_106 thinks this title is suitable for 15 years and over

capellacademy thinks this title is suitable for 18 years and over

Demigod4Ever thinks this title is suitable for 13 years and over

unexpectedbooklover thinks this title is suitable for All Ages

lesteremily7 thinks this title is suitable for 12 years and over

I think I could follow a Hostess truck in my sleep.

"So where are you taking me?" Whatever his answer, I wouldn't be scared. Not even if he said "slaughterhouse" or the far worse "karaoke bar."

"Manned up," I replied with a snort. "So you grunted a lot and drilled your knuckles into his shoulder."

"That's cave-manning up. Learn the difference."

"I'm not sick, Nana. Honest." Wasn't like I'd gone to a medical lab, asked for a dish of their tastiest virus and feasted.

I'd rather the world considered me crazy while I go down fighting than spend the rest of my life hiding from the truth.

My nose wrinkled and I grimaced. Honestly, if you stuck your head inside a dead horse's rectum, you wouldn't smell anything close to this."

He’s body slammed enough people to start a new country. And there could be a neighbouring city for the people he’s punched in the throat

Low maintenance is what’s forgettable. You might want to write that down, underline it, circle it and put a star by it. It’s golden.

Methinks he protests too much

“Yeah, okay. You're right. I was having dinner with Zombie Carl the other night. You know, steak, rare, and a bottle of vintage type A. He told me all his secrets, but too bad for you I promised him I wouldn't tell. In exchange I asked him to gather his best undead buddies and stalk me through my friend's yard. And oh, yeah, it was totally fine if they wanted to use me as an all-night-dinner buffet, because having organs is SO last year.”