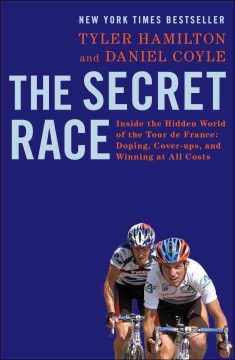 Inside the Hidden World of the Tour De France : Doping, Cover-ups, and Winning at All Costs

A once top-ranked cyclist chronicles his downfall after testing positive for doping after winning gold at the 2004 Olympics while also addressing the practice's pervasiveness in the sport and his relationship with Lance Armstrong.
Publisher: New York : Bantam Books, c2012
ISBN: 9780345530417
0345530411

Very revealing and informative. Hamilton’s pain tolerance level is insane. He often crashed in races (as pro bikers do). And, he broke his shoulder and at another time he broke his collar bone in two places. And, yet he continued racing for days and finishing the entire tour. Even his doctors did not understand how a human being could withstand such pain and still perform near top level.

Another theme is the disparity between the amount of energy pro bikers spend and how little they eat. They are truly like jockeys except it is not extra weight on their horse they are worried about it is on their bikes. And, it makes a huge difference. During training, Hamilton lost 5 pounds (from 139 down to 134) and his training time on a specific course improved from 36 minutes down to 32 minutes and a half. That is a 10% reduction/improvement in time. This is huge. Imagine a world class 100-meter sprinter being able to improve his time from a near world record of 10 seconds down to 9 seconds flat after losing 5 pounds!

Just as weight makes a difference, during the Lance Armstrong era, doping and blood transfusion made a huge difference. Lance’s winning time in a very hilly Tour de France stage was 38 minutes, a full 10 minutes faster than Greg Lemond and Bernard Hinault did 15 years earlier. This is a 21% reduction in time. This is crazy. Imagine someone running a 100 meter in 7.9 seconds instead of the current world record around 10 seconds. Over the past 70 years the world record has only declined by 0.2 seconds (from 10.1 down to 9.9 seconds).

Apparently, the sport is getting cleaner now and times are slowing down. Now the winning times for this same rough stage of the Tour de France are back in the 40 minutes + range.

The nefarious doctors that orchestrated all the doping and blood transfusion made a ton of money. Over just a few years they collected millions of dollars in bonuses.

Obviously so did the riders. But Lance was in a planet of his own. With prize money, bonuses, sponsorships, etc. He seems to have made well over $100 million.

During the Lance era it was absolutely impossible for a “clean” rider to compete. It is all about the % of red blood cells in the blood that carry oxygen throughout the body. As you bike race, it is a war of attrition. And, day-by-day your blood (red blood cells) oxygen carrying capacity declines. A clean rider incurs a handicap of a 2% loss in power per week vs. one that is doped. Over the entire Tour de France, this probably translates into the difference between coming in 1st or dead last several hours behind the leader. In other words, during that era a pro biker had no choice, either he doped or he would not have the enduring power to even qualify for such races.

You can tell that for Hamilton this whole book has been a cathartic therapy. It took a huge amount of courage to write it. Within the book, Lance comes across as a genuine monster and bullying ring leader of this doping circuit. And, Hamilton did an amazing job to survive around such a character that pretty much did everything he could on and off-biking to annihilate him.

Eye opening. He did a good job of explaining the Catch 22 that professional cyclists face when it comes to doping.

The Secret Race was a huge eye opener for me on the state of the competitive cycling world. I read this book after the Lance Armstrong scandal and it completely changed my understanding of the way professional cycling works. Now I know how pervasive performance enhancing drug use was inside the pro cycling circuit. Olympian and former pro cyclist Tyler Hamilton does a great job showing the sad truth about doping and cycling. Through this book I learned about how ignorant the early drug testing committees for pro cycling were. Tyler Hamilton’s account of how early dopers were able to get away with doping by hiding their syringes in crushed pop cans was particularly shocking for me. His accounts of stopping doping and going from a top level competitive cyclist to someone just hanging on at the end of pro races was similarly shocking. This book really changed my view on pro cycling and while I still enjoy watching the sports I will always be suspicious of even the cyclists who are on teams whose central identity is being “clean”.
-@CookieMonster of The Hamilton Public Library's Teen Review Board

This is an excellent book about the behind the scenes doping with Lance...and how he got away with it for years.

Written before Lance finally admitted he doped...which means he wrote this knowing the All Powerful Lance would get him blacklisted in the cycling world.

Fun to read. It seems that Hamilton poured his soul out. This is the type of book Lance Armstrong should write: the WHOLE and honest truth.

A really good, clear explanation of the methods by which cyclists use chemicals and blood products to get ahead. To the author's credit, nobody's an angel here, including Tyler Hamilton. But that Armstrong guy might be the devil himself. Amazing how he manipulated so many people for so long, and got away with it.

A revealing insight into the life of a professional cyclist in an era dominated by doping on an unprecedented scale. Now that Armstrong has admitted the truth of his doping and thus the truth of his critics who were right all along, I remain sceptical as to what Hamilton expects. He reports being surprised at being unwelcome on his return to cycling as he tried to find rides to see out the rest of his career. Whilst he did confess and perhaps there was animosity directed towards him from fans of Armstrong as well as the professional cycling world, on what basis does he expect a different reception? Hamilton was, when all is said and done, a cheat too.
I would recommend this book to anyone interested in cycling.

I learned alot about big-time cycling. Recommended. Yeah, what he did was wrong, but he understood that it was what was required. Either do it, or go home. He had to put any morality to the side. I laugh at the moral perfectionists. Do these people live there lives at a high moral level? Consider a manager in a corporation. He's told to layoff people to prop up quarterly profits for the benefit of bonuses for the few. Is doping to win a race any worse than ruining people's lives for the sake of a few bonuses? The manager has to make a decision...do it, or get another job.

After reading this book I am left with the conclusion that Lance Armstrong is a sociopath and Tyler Hamilton is a sheep, a follower and a simpleton. The message of his book? "The truth will set you free." Profound, right? Meanwhile, he expresses little to no remorse or guilt as he details years of lying, cheating and using PEDs. He even has the nerve to say he was victimized by the public after getting busted because they called him a liar, cheat and doper. Victim? Hardly. Hero for telling the truth? No way.

A must read, couldn't put this book down until it was finished, more intrigue than a spy novel.