Saved Searches Advanced Search
NEW: You may now place holds on up to 10 available & checked-out items. The Library is offering curbside service. For more information on how to access this service, please visit our website at https://www.ylpl.org/curbside/ . In order to ensure safe handling protocols, items are being held for at least 96 hours before being checked-in. During this time, no overdue fees will be incurred.
The Summer Reading Program is now available through Friday, August 14. To sign up, visit https://www.ylpl.org/summer/.
Print 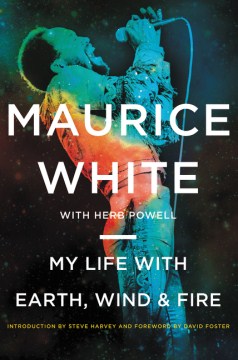 My Life With Earth, Wind & Fire

"Earth, Wind & Fire was one of the most popular and significant bands of the past century, celebrated alongside Chicago, the Commodores, Fleetwood Mac, the Eagles, and Sly and the Family Stone. They transcended genres and fused diverse influences, from R&B to pop to jazz and beyond, earning multiple Grammy Awards--and most recently a Lifetime Achievement Award, shortly after the passing of the band's founder, Maurice White. Although many of White's contemporaries and fans, including Quincy Jones, Questlove, and Diane Warren, felt a kinship with him through his music, he himself was an intensely private man. In this riveting account of his personal life and his massively popular band, he bares his soul. Raised by a family friend, relentlessly teased by schoolmates, Maurice found refuge in music and in visits from God. By the time he was six, he was singing in a gospel choir. He came of age musically with close childhood friends and future legends Booker T. Jones and songwriter David Porter. Trained at the Chicago Conservatory of Music, he later joined Chess Records, where he played drums for Etta James, Sonny Stitt, and countless others. With the Ramsey Lewis Trio he toured the world, honed his showmanship, and learned much about the music business, but after receiving what he believed was a message from the Divine, he created Earth, Wind & Fire. It was a band like no other--sellout crowds were spellbound by their costumes, energetic movement, dynamic horns, floating pianos, spinning drum kits, and vanishing acts assisted by magician David Copperfield. The band's performances were no less forgettable than their perennial hits: 'Shining star,' 'Reasons,' 'Got to get you into my life,' 'September,' 'Boogie wonderland,' and 'Let's groove.' Maurice also produced music for Deniece Williams, the Emotions, Neil Diamond, James Ingram, Barbara Streisand, and Jennifer Holliday. Maurice White's story illuminated Earth, Wind & Fire's position as a band essential to American culture, and offers an intimated look at his final days, from his diagnosis of Parkinson's disease to his faith, which helped him not only to cope, but also to savor every single moment. He dreamed that this band's music, a reflection of the ideals of the 1970s, would inspire peace and unity across racial lines. This compelling memoir shows how he achieved that and much more"--Dust jacket.
Publisher: New York, NY : Amistad, an imprint of HarperCollins Publishers, [2016]
Edition: First edition
ISBN: 9780062329158
0062329154

Alternative Title: My life with Earth, Wind and Fire

While watching YouTube videos of old EW&F performances, I noticed that the band members always looked bright-eyed, alert, & focused. This made me think that they must have had a strong work ethic which included avoidance of substance abuse. This reflective autobiography by Maurice White shows that this was indeed the case. Not only did they seek excellence in music but they also pursued it in mind, body, & spirit. Furthermore, they transcended the black -white barriers in a real & positive way and were innovative in blending as many genres of music as possible to create their signature sound. This is a must-read for many reasons--pop/rock/jazz music history, social reform, & one man's personal quest for meaning that affected many.

How I have always loved Earth Wind and Fire. After reading this book, I really wish I had seen them in concert! Maurice White was definitely a man before his time. This was a fascinating, in-depth narrative of the two decades over which White elevated the band from a struggling act to a multi-million-selling supergroup. EW&F broke through uncharted crossover territory on the charts and built remarkably integrated audiences in arenas throughout the world. I love that Maurice White knew what he wanted and never compromised his vision. Never.

Loading...
No similar edition of this title was found at YLPL.

Try searching for My Life With Earth, Wind & Fire to see if YLPL owns related versions of the work.