Saved Searches Advanced Search
NEW: You may now place holds on up to 10 available & checked-out items. The Library is offering curbside service. For more information on how to access this service, please visit our website at https://www.ylpl.org/curbside/ . In order to ensure safe handling protocols, items are being held for 72 hours before being checked-in. During this time, no overdue fees will be incurred. 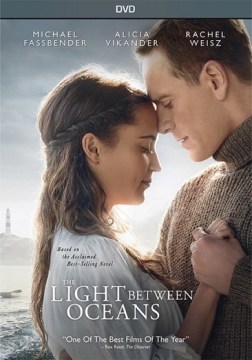 The Light Between Oceans

Enjoyed the movie,now I wish to read the book.

A touching movie about love and forgiveness.

Good Movie, We watched it twice and will watch it again.

A typical Dreamworks product. A mendacious, nonsensical, contrived movie that tries to float on weepy sentimentality and beautiful scenery.

Set in the post World War 1 era, this movie is rather long and slow paced; it needs to be to build up the atmospheric melancholia which permeates the storyline. Deeply moving and hauntingly beautiful, this outstanding film is enhanced with stella acting performances from leading actors Michael Fassbender and Alicia Vikander including Rachel Weisz in a supporting role. This is a sensitive, poignant movie with superlative cinematography & atmosphere along with beautiful and stunning scenery. If you like lots of action and violence, this film is not for you.

Such a lovely movie. Story was good. Unexpected ending. Heart breaking 💔 I would recommend watching it

Loved this movie. Great acting and a great story.

A chick-flickish heartbreaker requiring plenty of Kleenex. Lovely scenery and good acting, with a special shout out for Alicia Vikander and her amazingly expressive face. To be seen when you're in an über sentimental mood.

Excellent movie that raised some moral ethics and touching story of love, how far do we go for the one we love dearly and what is the cost we need to pay for the choice we do. This film makes you things about the consequences of our actions to other people. A must see movie. Highly recommended. Great performance of Rachel Weisz and principal female actor.

I was very impressed and moved with this film, as it was faithful to the 2012 book of the same name by M.L.Stedman. The book had me in tears, as did this film, as it successfully brought out the moral conflict between the characters played extremely well by Michael Fassbender (2016's X-Men: Apocolypse, & Assassin's Creed, Alien: Covenant: 2017 ), Alicia Vikander (Ex Machina:2014 , The Danish Girl: 2015, Tomb Raider: 2018) and Rachel Weisz (The Bourne Legacy: 2012, Denial: 2016, My Cousin Rachel: 2017).
The only complaint is not knowing how the young father had died, while the baby survived?
No bonus material on the DVD.

The dreariest of soap operas, layered with enough would-be sensitivity to persuade the viewer. I forgive Australians for this kind of thing because they are so isolated down there.

For those who do not wish to take the time to read the novel on which the film is based, it does an excellent job of conveying that story. And the actors capture the characters. .. and the scenery! !

Interesting story, but not quite believable, at least to me. A baby survives the elements in a row boat on the ocean? How long was she out there?

Their behaviour was so wrong, on so many levels. It kept me interested enough to watch until the end.

Not a bad movie, as far as movies go, but it is overly grim. The grimness permeates through the movie, and helps drag it down from being truly great. Instead, it's just an okay movie with some good dramatic performances and questionable morals.

really well done film. Moving, emotional, sympathetic.... you find yourself changing your allegiances to each set of characters throughout the movie. This is the movie that Michael Fassbender and Alicia Vikander met (and now they are married!) so I feel like the love between them is a little something extra. Highly recommend this rental!

A beautiful and moving story brought to life with a stellar cast, exquisite cinematography, and the ever thought-provoking director, Derek Cianfrance.

This is such a beautiful movie. It was full of love and surprise and heartbreak. I spent half an hour describing the entire thing to my boyfriend, and then did the same thing to my brother and my mother...needless to say, I'm definitely going to buy this movie ASAP. I thought it would be a happy movie, and boy was I wrong! I cried. So much. I didn't know it was a book, either! It is on my list to read now.

Loved it. Both of the main characters did a great job. Story was good.

I enjoyed this film and found the acting very believable.
Stunning scenery. Really lovely settings.
I have not read the book, but, seeing the movie has made me curious enough to want to read it, as there were parts of the story telling in the movie which were hard to understand, especially towards the end. The movie compressed too much of the story after the couple were arrested.
Well worth watching for the glorious settings and great actors giving heartfelt performances.

Although you understand why she does it, it really shows the effect of karma getting it's revenge .

Best to read the book than watch the movie!!!